Meet James, a 24-year-old with ASD – autism spectrum disorder. ASD refers to a broad range of conditions characterized by challenges with social skills, repetitive behaviors, speech, and nonverbal communication. Despite ASD, James said he tries his hardest to fit in, though it can be challenging for him. James held an internship before turning to Goodwill. He was not treated well by others in his internship, and he struggled with feelings of depression because he felt he did not fit in. Nearly a year later, James was still unemployed. He found filling out applications online to be complicated. After filling out eight job applications with no results, James applied to Goodwill. $13.53 Average hourly wage paid to employees with disabilities James was hired as a custodian at US STRATCOM at Offutt Air Force Base. Initially, he cleaned floors with the night crew, but now he works around children, which he enjoys tremendously. “Kids are very amusing,” he said. “Plus, they are nice to me.” James is now one of the custodians that provide services at Offutt’s Child Development Center. He said that since he started working at Goodwill, he has been doing much better. James even won Employee of the Quarter for his hard work and dedication. Steve Plourde, Project Manager at Offutt, supervises James. “James has a can-do attitude,” holds himself and team members accountable for high cleaning standards, said Plourde. “He’s a great asset to the crews he works with,” James said he finds his job very enjoyable because it keeps him busy. “I don’t know what I would be doing if it wasn’t for Goodwill – probably unemployed still,” James said. “Goodwill hired me and gave me a chance when no one else would.” 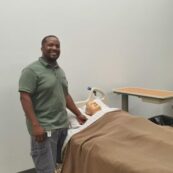