The event was canceled last year due to COVID-19, but the community is invited to celebrate this year

Goodwill Industries, Inc., Serving Eastern Nebraska and Southwest Iowa (Goodwill Omaha), is gearing up for a grand opening event — one that was planned for a year ago but which became one more event “canceled due to COVID-19.” Now, nearing the anniversary of opening the Goodwill Retail Store & Donation Center and the GoodBytes computer store at 8457 West Center Road, in Canfield’s Plaza, the stores will get the celebration they deserve. On Friday, May 14, from 8:45 a.m. until 5 p.m., the community can check out Goodwill’s newest locations at a first-anniversary grand opening event. 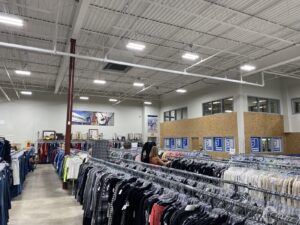 Around this time last year, many businesses in the Omaha metro area, including Goodwill, were beginning to reopen after temporarily closing due to COVID-19. Most people in the community were relieved to see this, but Janelle Ellis, director of retail operations at Goodwill Omaha, might have felt the waves of relief even more than most.

“I was so nervous that we were putting all this work and money into the stores in Canfield’s Plaza but might not be able to open them on time,” Ellis said.

In December 2019, Goodwill Omaha purchased the building where Canfield’s Sporting Goods resided for 71 years, intending to make a new home for its store at 8310 Spring Street and build out a larger space for its GoodBytes store, which was located at 72nd and F streets.

The Canfield’s Plaza space also houses a training room for Goodwill’s Work Experience program, which helps high school students with disabilities gain exposure to work situations in a supportive environment to prepare them for the transition from an educational setting to the working world.

Construction on the building was underway when Goodwill Omaha temporarily closed all locations on March 23, 2020 due to COVID-19.

“Although the opening of the stores wasn’t delayed, the grand opening celebration we had planned was canceled,” Ellis said. “A large grand opening event could have become crowded, and our leadership team wanted to keep Goodwill employees, program participants and the community safe from the spread of COVID-19. Safety is still our priority, so we’re doing a scaled-down version of our usual grand openings, but with the COVID vaccine widely available, people want to get out of the house, and this is something we can hold outdoors.”

The day will start with a ribbon-cutting at 8:45 a.m., just before the stores open, followed by a live iHeartRadio remote at 11 a.m. hosted by Steve Lundy from the KAT 103.7, raffle drawings every hour, free lunch, and face-painting and balloon animals by Loli Pop dah Clown.

Job seekers will also want to attend the festivities, as Goodwill Omaha is holding a hiring event in the store’s upper level, and representatives from Goodwill’s Employment Solutions program will also be on-site. Employment Solutions offers job training, certification and placement for anyone in the community who’s looking for a job.

“These stores are really beautiful, and we’re excited to be able to invite the community to celebrate them with us, even if it’s a year later,” said Tobi Mathouser, Goodwill Omaha’s president and CEO. “We want this to be an event that the community and our neighbors in the area enjoy and that gives them a chance to become reacquainted with Goodwill if they aren’t already.”