Building a PC with Goodwill Parts

Building a PC with Goodwill Parts

In the last decade, homebuilt computers, especially for PC gaming, have become an increasingly popular option for tech enthusiasts. Generally, these are assembled with new, but occasionally refurbished, specialty parts ordered online. However, one Reddit user has challenged themselves to upgrade a Windows 7 PC using only parts found at Goodwill. According to user VikingRaid13, they noticed that people “throw out a lot of interesting stuff,” including computers with still powerful parts. 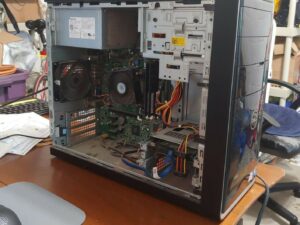 For the base system, VikingRaid13 bought a Dell Inspiron 620 for $10, a popular pre-built consumer desktop computer 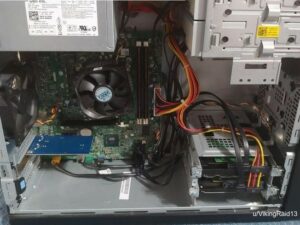 first released in 2011. From there they started upgrading from two other Goodwill purchases. From an Alienware gaming PC, they were able to add a USB 3.0 PCIe card, upgrade the boot drive from a 500 GB hard drive to a larger and faster 2 TB (2,000 GB) solid-state drive. From an HP desktop PC, VikingRaid13 installed a second DVD drive. They admitted that at this point, “these [were] by no means impressive upgrades.” They said they had more parts they could put in, but these wouldn’t be compatible until they found upgrades for the motherboard and power supply unit (PSU).

That was in early July. Just over a month later, VikingRaid13 pulled parts from two Dell Precision systems, upgraded the RAM from 3 GB to 8 GB, and added a graphics processing unit (GPU). The computer they started with, the Dell Inspiron, came with integrated graphics, so adding an AMD Firepro V4900 from the Dell Precision increased the graphics capabilities significantly, even if the card is a decade old. VikingRaid13 also upgraded the core processing unit (CPU) from a Pentium G620 to a Pentium G860, which should make the computer run faster. Unfortunately, they weren’t able to upgrade the motherboard yet because the newer PCs used non-standard motherboards which would not fit in the HP case.

The Reddit user had to break his rule of only using Goodwill parts by adding a heatsink. Heatsinks are important for cooling computer chips, so this was necessary to keep the computer from self-destructing. VikingRaid13 plans to continue this project, writing “The saga isn’t over yet. I intend to do my trips to Goodwill at least three more times, so we will have to see what happens to this computer by the end of the summer.”

Here in Omaha, Goodwill refurbishes PCs for you. That means testing, cleaning, and replacing parts to make sure you aren’t just buying a doorstop with microchips in it. We also erase any personal data from hard drives using a Department of Defense-standard data wiping process. You can find refurbished computers at our GoodBytes location, along with video game consoles, games, and computing accessories. Whether you are a serious hobbyist scavenging for parts, or you’re just looking for affordable consumer electronics, GoodBytes has you covered.